Martina Rošková is a pure deal maker. Her strong transaction drive, success orientation, personal integrity and dedication, has led her to succeed in realizing numerous global investment and sales transactions and to establish her strong track record in increasing shareholding values. Her motto is: believe in what you do, do it professionally and never give up. She has always steered her projects to a successful conclusion, often despite many obstacles. She has never been afraid to think big and made maximum efforts to realize her professional projects. She believes that professional obstacles and challenging tasks are the best driving force behind our growth and overcoming them leads to SUCCESS. 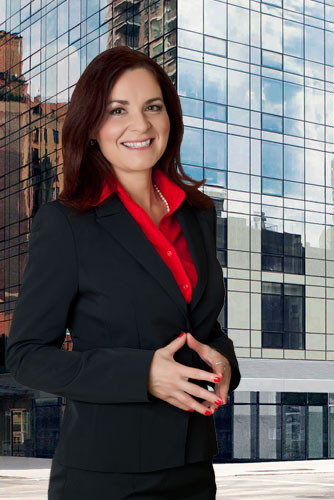 “During my professional carrier, I have only selected difficult and challenging tasks, and I have been lucky that for these difficult projects I have always been chosen. I believe that a unique success is always achievable if it is based on 100% dedication, hard work and the belief that a positive conclusion is going to be the only result of a certain project. I do not believe in long analyses and useless political speeches, but in concrete, professionally prepared transactions and in personal responsibility for project results. In line with these principles, I project manage PRIVILEGE CAPITAL. Furthermore, I believe that credibility, fair-play, loyalty and hard work contribute to success”

She executed investments and managed private equity and venture capital funds, and restructured the firms when in the following executive positions: Partner and Director for the Czech and Slovak Republics at Raiffeisen Private Equity Management, president and chief Operating Officer for the U.S. Government Czech-Slovak American enterprise fund, General Manager for the Czech and Slovak Republics of KBC Private Equity AS, director for the Czech Republic and Slovakia of South African investment fund C2C Capital, investment committee member of the Slovak restructuring investment fund, a Value growth fund co-owned by the US government, EBRD, and the Raiffeisen Group.

As a professional at Arthur Andersen (later Andersen Worldwide), as the first member of the corporate finance team, she provided transaction advice to leading multinational corporations entering the Central European market, carried out M&A transactions in Central and Eastern Europe, and participated in the restructuring of industrial holding companies.

Prior to her direct investment career, Martina Rošková spent five years with Arthur Andersen (Andersen Worldwide), where she provided corporate finance and strategic market entry advisory to leading multinational corporations on their market entry to the central European market, working on M&A transactions in central and eastern Europe and restructuralization projects of the leading industrial corporations.

She participated in the World Bank privatization of the key mining company in the Balkans, as well as other M&A of energy, oil and mining projects in the emerging markets and the Far East. She was one of the pioneers of the venture capital in central Europe, and during her engagement for the European Union Phare, participated in the establishment of the credit support and the first venture capital fund for the Czech small and medium sized sector. Her advisory activity also included work for a number of leading Fortune 100 firms, traded or major firms (from the U.S., Australia, western Europe) on their expansions into the central European market.

During her investment management career, she worked with companies spanning all sectors and served as an active Board of Directors and Supervisory Board Member of the leading firms. During the first years of her professional career, she contributed to the creation of selected joint-ventures and international trade developments between North-American and central-European companies.

Martina Rošková holds an MBA from the Rochester Institute of Technology, U.S.A., and a Master in Economics degree from a Technical University, Czech Republic. She completed certified courses in the field of corporate finance, banking and management from the U.S., Canada, Spain, the Netherlands and Taiwan. She was named the Business Valuation Expert Witness.